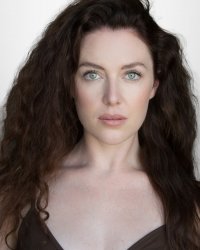 Bridget recently played the lead role of Christine Daae in The Phantom of the Opera in the West End. Joining the company in 2016 in the role of Swing, she moved up to understudy Christine in 2017-19 and played Alternate Christine in 2019-20.

Bridget moved to London in 2013 to study a PGDip in Musical Theatre at the Royal Academy of Music. Prior to this she graduated from the New Zealand School of Music with a BMus and PGDip in Performance Voice.

In 2019, Bridget had the honour of singing the New Zealand and British national anthems at the ANZAC Day Dawn Service at Hyde Park Corner. In 2016, she featured as the Opera Singer in an Etihad Airways Virtual Reality commercial staring Nicole Kidman, and in 2015 performed on This Week (BBC One) and In Tune (BBC Radio 3).

Her credits while training include Amy March in Little Women (RAM), Ivy in On the Town (RAM), Marianne in Constellations (RAM), Tytania in Britten’s A Midsummer Night’s Dream (NZSM), Cover Iris in Handel’s Semele (NZSM).